Newpoint has taken unprecedented action to develop and integrate processes to produce clean water, electricity and a hydrogen energy source from zero-emissions natural gas technologies. Principles of the company are targeting an end to end system demonstration by the close of 2019.
This electric power generator and water production process converts zero-emission natural gas into hydrogen. In this challenging time of global water scarcity and increasing demand for energy, innovative technology utilizes the world’s abundant supply of responsibly produced and transported natural gas as a low-carbon energy source. Newpoint’s approach converts methane and other gaseous hydrocarbons into hydrogen. The carbon dioxide produced is sequestered and/or used in manufacturing which is why this hydrogen source is referred to as blue hydrogen. Newpoint is committed to the implementation of this sustainable technology on an economically and environmentally full system basis.

Technology Process
The first stage concentrates oxygen (O2) by separating nitrogen (N2) from atmospheric air through an Air Separation Unit (ASU). The nitrogen can also be sold as a byproduct. Concentrating the oxygen reduces the volume of exhaust gas that must be treated through later stages of the process. The purified oxygen is added to the natural gas stream and injected along with steam into a syngas reformer. The combination of oxygen and natural gas is converted to hydrogen (H2), carbon dioxide (CO2), and water vapor. Excess heat produced by the syngas reformer is utilized to generate power while the H2, CO2, and water vapor enter a hydrogen purification system.

The hydrogen purification unit separates the H2 from the CO2 and water. The CO2 is sent toa compressor and is ultimately sequestered and/or used in manufacturing. The purified hydrogen is sent to a power generator, combined with air to generate electricity. The H2 and air exhaust is cooled to approximately 100°F (38°C), condensing the water created from the combustion.

In addition to water production and electrical generation, Newpoint’s system is designed to supply an optional source of blue hydrogen that can be used as fuel for cars, trucks and other transport modes. This optional fuel source adds additional environmental value by eliminating emissions (CO2, VOCs, etc.) from vehicle transportation further contributing to a low-carbon economy.

“Newpoint’s focus since 2015 has been on the environmental and social impact of oil and gas.  We overcame challenges with inventive action in developing technologies for Zero Emission Oil & Gas production and Blue Hydrogen that target immediate change. Now our attention is on implementation,” states Newpoint’s founder and CEO Wiley Rhodes.

Benefits
• Eliminates carbon monoxide and volatile organic compound (VOC) emissions;
• Produces purified water;
• Provides a zero-emission electrical power source;
• Creates a feasible hydrogen energy source;
• Reduces the cost of CO2 sequestration or reuse resulting from electrical power generation;
• Establishes a feasible hydrogen source to offset the investment required for the infrastructure to distribute hydrogen;
• As hydrogen is further integrated into a low-carbon economy, expansion of the infrastructure can further utilize this environmentally friendly fuel source;
• Green hydrogen which is derived from water using 100% renewable energy, will begin production, at scale, when an economical process is developed. The blue hydrogen infrastructure can be utilized in the future by transporting both hydrogen products.

Conclusion
Water, electricity, and hydrogen are produced while contributing to a low-carbon economy. As the scarcity of clean water rises with the demand for earth-friendly energy sources, Newpoint’s precedent-setting innovations will be scaled to meet demand.

Source: Newpoint Gas, LLC in cooperation with The One Step In Foundation
www.newpointgas.com

Newpoint designed and manufactured a 175 MMscfd JT plant and meter station for West Africa.  This plant went to a remote site in the Nigerian Delta.  The plant was built using Standard Module Engineering and was shipped entirely in shipping containers.  This allowed the equipment to be stored on site without concerns of degradation due to weather etc.  The plant was assembled in 3 weeks due to the unique design that allowed some of the equipment to stay in shipping containers during operation. 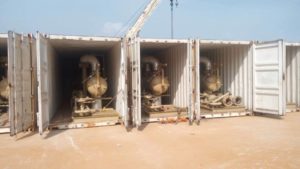 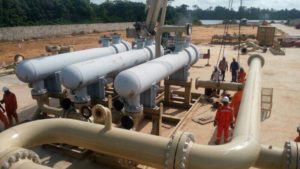 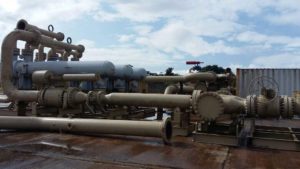 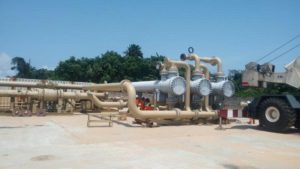 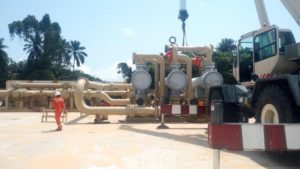 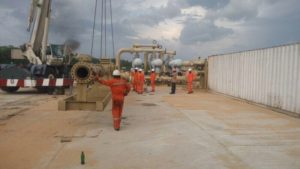 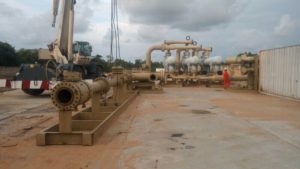 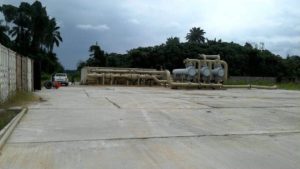 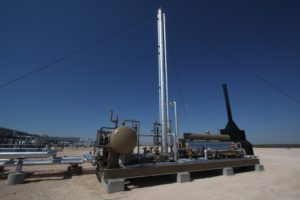 The strength of our relationship with the producer started several years earlier and built on supporting the company with operational and engineering support. The areas covered included West and South Texas, Eastern New Mexico, and Louisiana.   With the success of the company’s drilling program in the Permian Basin, our duties grew to include a 35 MMscfd cryo plant.   We acted as owner’s engineers evaluating pipeline capacity, field vs plant compression, field dehydration, process simulations, PHA (Process Hazard Analysis), site selection, cryo plant supplier selection, and project management.   We also designed and manufactured a direct fired 550 bbl/day condensate stabilizer providing 9 RVP product.  Under Newpoint’s supervision, we completed the project in Loving County, Texas on time and on budget. 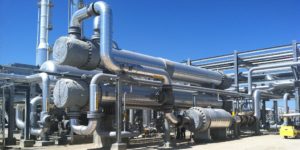 According to our client, the world’s largest catalytic oxygen system was installed in California using our proprietary technology.  This plant can treat up to 140 MMscfd of gas at 1140 psig from 225 ppmv oxygen to less than 5 ppmv. 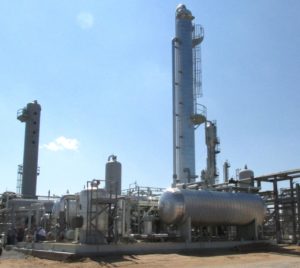 A new 350 gpm amine plant and hot oil system was delivered to NW Oklahoma.  The planted is treating 120 MMscfd from 1.15 mol% carbon dioxide to the less than 50 ppmv.  Utilizing modular design, the interconnecting piping was installed in 1.5 days with a two person crew.

Newpoint Gas, LLC, an Oklahoma limited liability company unites the expertise gained in the well flow back operation and the process heating business back to the oil and gas industry.  Formed in 2017 this partnership reunites the principals of the original Newpoint created in 2002.  This website contains information about past projects executed by the principals of Newpoint as well projects completed in the new company.

OKLAHOMA CITY, OK USA
Newpoint Gas, LP and UOP, LLC, a division of Honeywell, entered into a three-year Cooperation Agreement on October 30, 2009.  The primary focus of the Agreement between the companies is to promote and develop the use of Newpoint Gas, LP’s “Standard ModularTM Amine Unit” (SMAU) within the refining and petrochemical industries utilizing certain UOP technologies such as its fluid catalytic cracking and hydrocracking processes and its “EcofiningTM Process.”

“Standard ModuleTM engineering will revolutionize the design of gas facilities in the future,” said Wiley Rhodes, Newpoint CEO.  “The cooperation agreement between Newpoint Gas and UOP is an excellent example that companies are seeking economical and reliable solutions in the execution of gas treatment projects.”

Newpoint Gas, LP is headquartered in College Station, Texas, USA with the Newpoint Companies’ executive offices located in Oklahoma City, Oklahoma, USA.  Newpoint is an engineering, design and manufacturing company specializing in Standard ModularTM gas treatment facilities.  Integrated technology designs are provided on a turnkey or equipment leasing basis with full installation, start-up support and training for operation.  Newpoint has sales and engineering offices throughout the world and are DNV ISO 9001:2000 accredited and are prequalified as a supplier with First Point Assessment, Ltd (Supplier #10050980) and Achilles JQS (Supplier #26787). 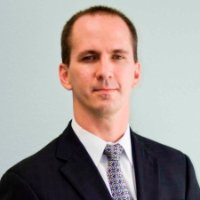 The FLNG Project Advancement Conference will incorporate the most recent international information regarding FLNG plans and lessons learned during recent pilot projects. This conference will consist of the latest information and news from operators, shipbuilders, and engineering developers. A few topics that will be addressed include cost effective technology available for FLNG, information management during FLNG projects, FLNG project collaboration initiatives, and the future of FLNG development. Additional issues that will be discussed incorporate the analysis of gas field characteristics to match with topside FLNG technology, storage containment technology and processes, innovative systems for the next gereration of loading and receiving terminals, and long-term operational plans after FLNG construction. For more information about the FLNG Project Advancement Conference, please visit http://www.flngprojectadvancement.com.

Mr. Rhodes received his B.S. and M.S. from Texas A&M University and is currently completing his Ph.D. in control systems.

Mr. Rhodes has been President of Newpoint Gas, LP since 2002. Prior to becoming President, he served as a lecturer at Texas A&M University, where he taught courses on system analysis and control systems. He has designed applied systems that range from heave compensation systems for remotely operated vehicles to specializing in the design and manufacture of standard and custom engineered gas processing and treating units. Mr. Rhodes has also presented several papers throughout the United States and at an international conference in Mexico. Mr. Rhodes manages the daily operations of Newpoint Gas, LP while also overseeing the engineering and design of all gas processing and treating units.

The Newpoint Companies announced today that Chief Executive Officer, Wiley Rhodes has been invited and will present at the 19th Annual International Congress “Innovative Technologies in Oil, Gas, Energy and Communication Sectors” (CITOGIC-2009) to be hosted in Ufa, Bashkortostan, Russia September 23-25, 2009.

CITOGIC gathers 170 scientists as well as leaders and specialists from the largest oil and gas companies of Russia, Ukraine, Lithuania, Germany, France and the Netherlands.

Newpoint Gas, LP is the world leader in providing gas treating and processing equipment and holds several proprietary technologies and supply systems to almost every continent in the world.  The company designs and manufactures a full range of standard and custom-engineered modular units.  Newpoint’s integrated technology designs are provided on a turnkey basis or equipment leasing basis.

In a continuation of the April 2nd, 2009 meeting in Malaysia, Newpoint meets at the company headquarters and presents designs for a large Floating Liquid Natural Gas (FLNG) pretreatment facility.