Arsi-Guard™ is Newpoint’s proprietary catalyst based system for the removal of arsenic from natural gas. Arsi-Guard™ can reduce organic arsenic concentrations to below 1 ppb to eliminate environmental liability and improve primary catalyst performance in ammonia and LNG facilities. 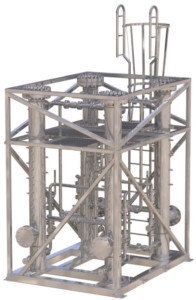 The first arsenic removal system in the world was installed in 1988 at the Abo Field in New Mexico by principals at Newpoint Gas. After several trials, the resulting system has been on line and removing arsenic for over 19 years and treated a cumulative gas volume of 750 Bcf. Newpoint has experience in arsenic removal from 1200 µg/m3 (960 ppb w/w) inlet and a consistent residue concentration:

The ability to accurately measure arsenic concentrations in a gas stream has proven extremely difficult. Newpoint also offers arsenic measurement solutions utilizing a validated process with a 17 year history. We have procedures and equipment that can measure arsenic levels to less than 0.1 µg/m3.

Arsenic has considerable economic impacts on the industries that utilize natural gas. Methanol, ammonia, and hydrogen plants all utilize catalysts that degrade over time due to the presence of catalyst poisons. The catalyst poisons, which include sulfur, mercury, and arsenic, degrade the performance of the system over time, reducing the capacity and efficiency of the plant. This has led to catalyst guard beds to remove sulfur and other catalysts poisons before the gas is introduced to the catalyst in the plants. In the case of arsenic, these guard beds have been reasonably effective in removing inorganic arsenic from the inlet natural gas stream; however, the organic arsenic compounds behave in a much less reactive manner and are not removed in the guard beds. The organic arsenic then reaches the catalyst and begins fouling it. The downtime associated with change-outs and the reduced capacity of plants due to catalyst fouling represent a considerable loss of income and a costly maintenance issue. The costs associated with arsenic fouling have been considered a “cost of doing business.” This is no longer the case; Newpoint’s ArsiGuard™ system has given the natural gas industry the tools to manage organic arsenic with low capital and operating costs. This treatment is efficient at ambient temperatures and can reduce organic arsenic concentrations to below 1 ppb.